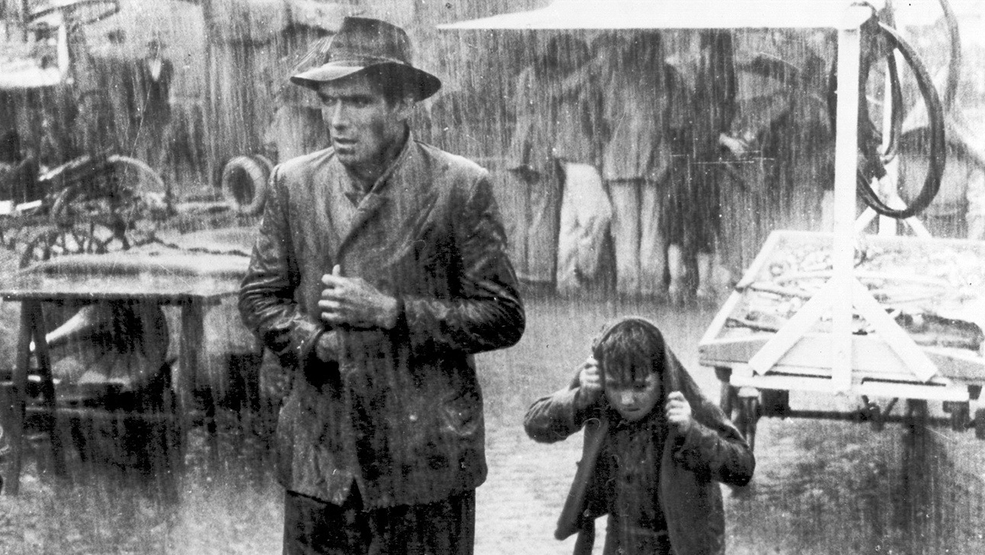 “Why should I kill myself working when I’ll end up just as dead?”
Maggiorani (as Antonio) in The Bicycle Thief

After two years of unemployment, Antonio, a laborer, finally secures a job putting up movie posters around Rome. In order to travel from location to location, he has to have a bicycle, which he gets out of hock by pawning the family’s linens. But on his first day of work, the bicycle is stolen. With his son in tow, he explores working-class Rome in search of the thief, who always seems a few steps ahead of him. As his search leads him to a union hall, a fortune teller’s and a whorehouse, he grows more desperate until he sees a theft of his own as the only way of saving his family. As his odyssey through working-class Rome grows in stature, Antonio becomes a powerful metaphor for the plight of humanity caught in a hostile universe.

This screening is being held in collaboration with the Italian Cultural Institute and Spazju Kreattiv.

The First European Cinema Day is an initiative of Art Cinema CICAE in collaboration with Spazju Kreattiv, and is supported by Ms Monika Grütters, the Minister of State to the Federal Chancellor and Federal Government Commissioner for Culture and the Media (Germany); Ms Audrey Azoulay, the Minister of Culture and Communication (France); Wim Wenders, Juliette Binoche, Nanni Moretti