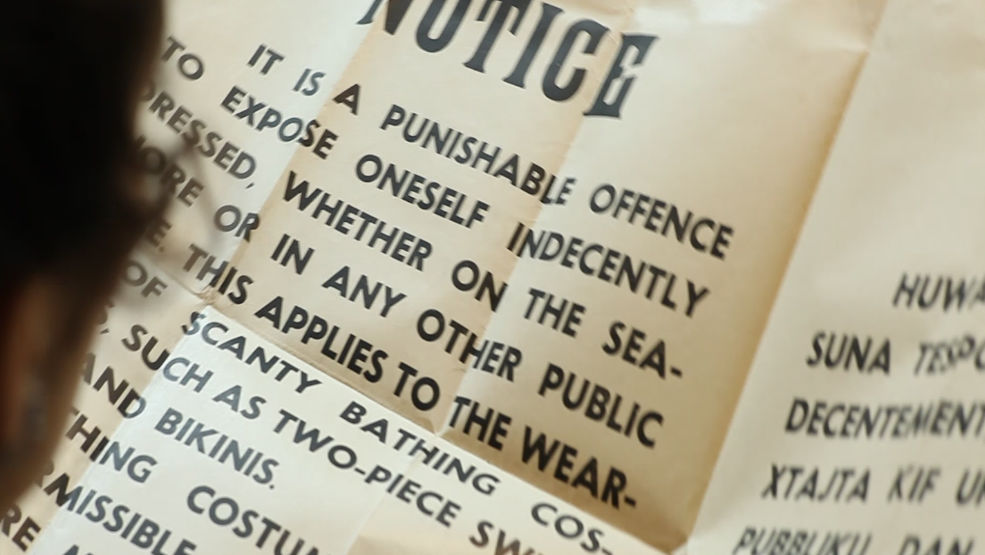 “Attention girls: … Do not try to attract attention by laughing or talking loudly in a public place… Do not exaggerate in the clothes you wear. Boys are very often embarrassed if the girl they are with is wearing too mini a skirt, too much make-up or a dress which is too low cut.
Times of Malta, Friday June 7, 1968”

The documentary-film “Burning Bikinis” takes inspiration from a Maltese urban legend in which bikinis were bought in bulk and burnt in a public square in Malta in the 1960s! In the same period several women were arrested and taken to Court for wearing bikinis. Concurrently Archbishop Mikiel Gonzi requested the then Prime Minister Borg Olivier to establish a special branch of the police force wit…h the “exclusive function to safeguard public morality“.

The film centres around the collective memories of women’s movements in Malta from the 1960s up until present day. An almost total absence of public, academic and journalistic records attesting to Maltese female lobbies or organisations led to the researchers interviewing women active in those days and tracing those incidents, events and places that were so important to their struggles.

This documentary-film is funded by the Arts Council Malta, Creative Communities, together with the Embassy of the Federal Republic of Germany and the U.S Embassy.

On the occasion of International Women’s Day (IWD) 2017, Aditus Foundation together with the European Parliament Office in Malta shall be screening the documentary-film “Burning Bikinis” followed by a panel discussion with MEPs and stakeholders discussing the history of feminism in Malta from the 1960s, and the road ahead.